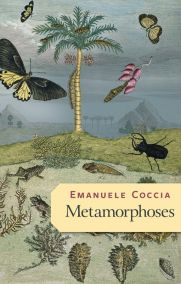 at transforms itself into a butterfly.  Their bodies have almost nothing in common.  They don’t share the same world: one crawls on the ground and the other flutters its wings in the air.  And yet they are one and the same life.

Emanuele Coccia argues that metamorphosis – the phenomenon that allows the same life to subsist in disparate bodies – is the relationship that binds all species together and unites the living with the non-living.  Bacteria, viruses, fungi, plants, animals: they are all one and the same life.  Each species, including the human species, is the metamorphosis of all those that preceded it – the same life, cobbling together a new body and a new form in order to exist differently.  And there is no opposition between the living and the non-living: life is always the reincarnation of the non-living, a carnival of the telluric substance of a planet – the Earth – that continually draws new faces and new ways of being out of even the smallest particle of its disparate body.

By highlighting what joins humans together with other forms of life, Coccia’s brilliant reflection on metamorphosis encourages us to abandon our view of the human species as static and independent and to recognize instead that we are part of a much larger and interconnected form of life.