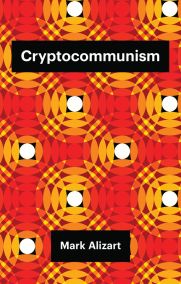 Cryptocurrencies are often associated with right-wing political movements, or even with the alt-right. They are the preserve of libertarians and fans of Ayn Rand and Friedrich Hayek. With their promotion of anonymity and individualism, there’s no doubt that they seamlessly slot into the prevailing anti-State ideology. But in this book Mark Alizart argues that the significance of cryptocurrencies goes well beyond cryptoanarchism. In so far as they allow us ‘to appropriate collectively the means of monetary production’, to paraphrase Marx, and to replace ‘the government of persons by the administration of things’, as Engels advocated, they form the basis for a political regime that begins to look like a communism which has at last come to fruition—a cryptocommunism