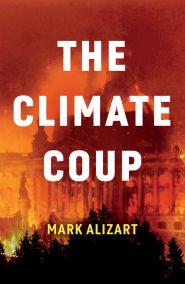 Inaction by governments in the face of climate change is often attributed to a lack of political will or a denial of the seriousness of the situation, but as Mark Alizart argues in this provocative book, we shouldn’t exclude the possibility that part of the reluctance might be motivated by cynicism and even sheer evil: for some people, there are real financial and political benefits to be gained from the chaos that will ensue from environmental disaster.

When states not only allow their forests to burn but call for them to be set on fire, when they not only ignore the Paris Agreement but tear it up in public, when they aren’t satisfied with doubting scientists but also seek to intimidate them, they are, in effect, taking active steps to destroy the planet. The climate crisis creates its winners – individuals who orchestrate environmental chaos and bet on the collapse of the world as they bet on declining share values.

In the face of this veritable ‘carbofascist’ coup targeting humanity, modifying our behaviour as individuals won’t suffice. We must train our critical attention on those financial and political actors who speculate on catastrophe and, in the light of this, we must rethink the strategy of ecological activism. This is a war to win, not a crisis to overcome.