Beyond the Pleasure Principle

Programme notes for the Royal Ballet performance of Live Fire Exercise, collaboration between John Gerrard and Wayne McGregor, May 2011.

The art of dance has always been recognized as one of the most honest and necessary for the training of the body, and as providing it the most fundamental and natural disposition to all sorts of exercise, the bearing of arms included; and consequently one of the most advantageous and most useful to our noblility, and others, who have the honour of serving us, not only in armies in wartime, but also in peacetime in the amusements of our ballets.
– Louis XIV, Founding letters patent of the Academie Royale de Danse, 1661.
To survive and surmount years of disciplinary preparation and seasons of even more arduous performance requires rigid determination and almost mindless self-abnegation.
– Lincoln Kirstein, Four Centuries of Ballet (NY: Dover, 1970)

Wayne McGregor’s new work has been developed by the choreographer in collaboration with artist John Gerrard. Combining an innovative artform with equally radical choreography, Live Fire Exercise prompts some complex questions about power, theatricality and military force in contemporary society.

McGregor had an immediate reaction to them: ‘This kind of bleak hyperrealism is something I hadn’t experienced before. It’s not film projection, nor video. There’s something eerily evocative about the medium and extremely provocative too: Where do these images come from, what are these places?’

For their collaboration Gerrard used as reference material US Army photographs of military operations in a remote Dijbouti desert. The images document an exercise intended to prepare troops for the physical impact of mortar rounds or roadside bombs: We see two columns of soldiers deliberately subjected to the force of an explosive charge; captured at the moment of detonation, the soldiers’ bodies are distended by the blast, reshaped by the forcefield of war before the campaign has even begun. 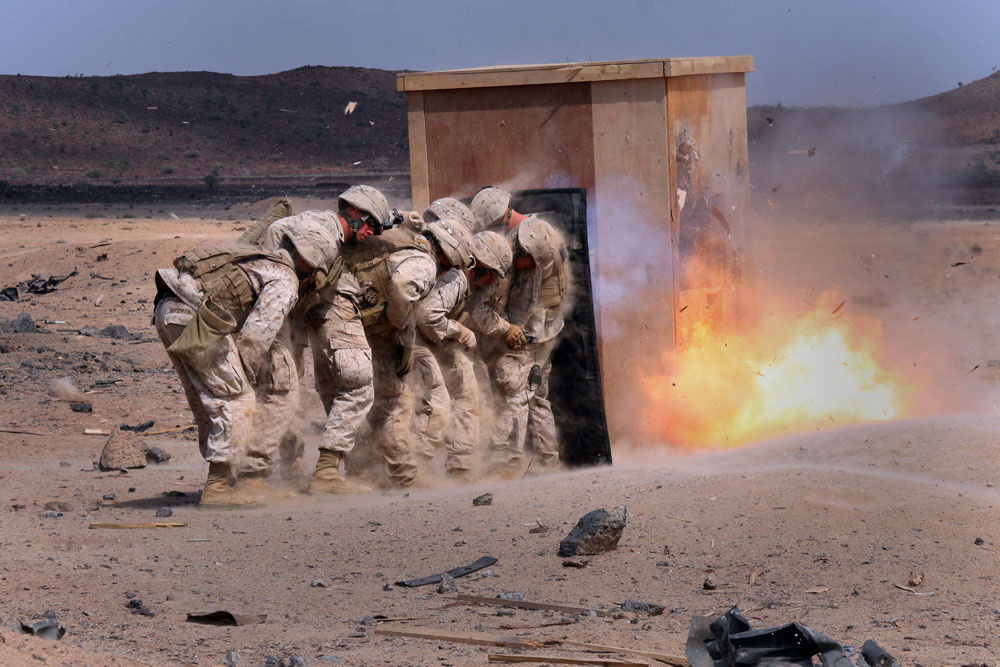 In the wake of World War I, Sigmund Freud worked with shellshocked soldiers, observing how in dreams and other symptoms they replayed or repeated traumatic experiences in manageable portions. Apparently striving to master the overwhelming events, their dreams functioned not as fantasised realisations of desire, but as episodic discharges of trauma. The exercise documented in these photographs seems to reverse this sequence, a calculated exposure to risk subjecting the troops to a staged ‘pre-shellshock’ in order to buffer the inevitable contingencies of action. Here, the symptoms precede the trauma.

In other shots we see men frozen like toy soldiers, taking up formulaic poses of battle-readiness, or made up with movie prosthetics as casualties for battle simulations. Intrigued by this strange blurring of theatre, cinema and reality, which drills soldiers for the contingencies of war but also functions as a media spectacle, Gerrard asks what these bodies make legible about the nature of power today.

The artist immediately saw their ‘shapes of readiness’ as ‘choreographed’ and ‘balletic’, so they naturally became the starting point for his dialogue with McGregor. Of course, ballet places extraordinary demands on dancers, and the very real risk of physical injury must be countered by the drills of daily technique class. Gerrard draws the parallel: ‘It’s as if, through this lifelong training, the dancers are preparing themselves for some ultimate, unknown trauma …’ And McGregor suggests that the history of ballet confirms the artist’s intuition: ‘Ballet itself is not a natural language, it’s the very opposite; ballet itself emerged from a form of military exercise, and later the discipline and the artistry evolved into something else.’

Although the Ballet Comique de la Royne Louise (1581), generally recognized as the first authentic ballet, was devised to exult the queen in order to restore harmony and prosperity to a troubled state, the subsequent great flowering of dance under Louis XIII did indeed see it integrated with the military arts. Dancing masters also instructed in fencing and riding, and their art found its ostentatious apotheosis in minutely-plotted equestrian ballets or carousels, where ceremonial choreography was interspersed with mock battles. These great spectacles demonstrated and celebrated royal power, but also retained troops in a state of preparedness. The currency of the parallel between dance and warfare is summed up by a famous anecdote that tells of the Maréchal Françoise de Bassompierre rallying his troops to lay siege to a fort with the words: ‘The décor and the dancers are ready – let the ballet begin!’

But it was the Sun King who most explicitly employed ballet as a strategy of power: Louis XIV’s founding of the Académie Royal de Danse in 1661 codified and regulated dance under the strict surveillance of the Crown, establishing it as a body of knowledge and appointing masters to assure discipline and proper training. In its charter, the King explicitly reminds us that dance also serves to keep peacetime bodies prepared for bearing arms. Thus, however autonomous ballet may since have become, its has its early-modern roots in a kinship with the art of war and the maintenance of sovereign power.

Today, Western powers are summoned to prepare for ‘unknown unknowns’, to engage in ‘asymmetric warfare’ – and a part of this preparation involves rendering their fitness legible for the media. In the transformation of the soldier’s body through this continuous, impossible, theatrical preparation for the unforeseeable, Gerrard sees an intriguing convergence with McGregor’s work: ‘In Wayne’s choreography, something is being disrupted. It’s a trauma for the body, and the body has to find a new way of being in order to do that, which takes a long time. It’s a form of pre-emptive violence – we talked about speed and asymmetries, and multiple co-ordinations as a way of traumatizing the body.’

Indeed, McGregor’s famously demanding choreography heightens the ‘unnaturalness’ of ballet: ‘Dancers have trained their bodies in this very particular codified language which concentrates on balance, symmetry, position, line and clarity,’ he explains. ‘And often what I’m doing is disturbing those symmetries, attempting to destroy this type of co-ordination, unsettling this equilibrium.’ McGregor sees this challenge as a part of the ‘shattering of a certain sort of realism’ the collaboration aims to achieve; ‘I think it’s very much connected to the language John brings to his work.’

This new alliance between the virtual landscape of military power and McGregor’s exploration of the virtualities of the body also called for a reappraisal of the classical theatrical apparatus – another arena in which theatre, warfare and power have been knotted together, notably during Da Vinci’s career under Sforza in Milan, where the polymath’s workshop turned out sets and innovative stage devices as well as military machines. As McGregor explains, for LFE, the stage has been ‘desertified’: ‘We’ve taken away the wings and the flats, so that the dance floor expands almost to the external walls. You are left with this massive space, with some of the structural armature of the theatre exposed. It changes the temperature of the stage rather significantly. You’re no longer trying to disguise anything or create a seamless theatricality. What’s there is there, on show and visible.’ Here McGregor references the stripped-down ascetic beauty of Frederick Ashton’s 1946 Symphonic Variations. Ashton’s first abstract piece produced by the Royal Ballet, Symphonic Variations removed all unnecessary detail, decoration and storytelling to focus attention solely on the dancers themselves – an ‘exercise in physicality without obvious meaning or narrative’ that McGregor is happy to see as a precedent.

LFE could equally be seen in the context of the minimalist legacy in art: In the 60s and 70s, artists such as Donald Judd, Sol Lewitt and Carl Andre strove to make art objects that stood alone, presenting the viewer with nothing other than their own literal presence. In LFE the monolithic physical presence of the projection screen is not effaced by the virtual scene that unfolds on it; nor does the latter illusionistically absorb the dancers. McGregor explains: ‘We are used to theatre being a form of cultural exercise where the action on stage evokes other worlds – an extended realism. But LFE presents a polyphony of worlds, where disparate versions of time – manufactured time, real-time, algorithmic time and the timing of the audience’s experiences – intersect and interrupt each other.’

Here, minimalist demystification dovetails with Antonin Artaud’s call for a ‘theatre of cruelty’ that overpowers representation to act on a more direct, visceral level – a theatre for which Artaud also coined the term ‘virtual reality’. But what will this experience be like for the audience? ‘Rather dislocating, perhaps,’ says McGregor. ‘The multiple realities may sit uncomfortably for some people. But I think this disquieting is part of the aspiration of the work – look at the subject matter. I think we are asking the audience to wrestle with ambiguity in the work.’

Given all of this, the choice of Tippett’s 1953 Fantasia Concertante on a Theme of Corelli for the score may surprise some. ‘Usually, in the hierarchy of collaboration in dance, music is most prized. But our point of departure for this project was John’s virtual portrait, and the rest of the creative decisions have emerged from that scene. Tippett’s pastoral score seemed ideal as a vivid portrait of the land, both the desolate Dijbouti desert and the flatlands of Suffolk; and it provoked an unlikely marriage between the militarism of the scene and the pacifist Tippett’s music. It seemed like a really interesting collision of forces.’ McGregor reflects that Tippett’s piece also operates its own disruption of the classical vocabulary: ‘In music, composers have always versioned and appropriated themes from other composers for their own ends, often pushing them into new territories. Tippett reinvents and reinterprets Bach and Corelli motifs, quickly channeling them into passages that aren’t bound by prior musical convention. They start out restricted by a certain syntax or logic – and then you have these flights of fancy. And this is what I’m interested in doing with the body and the composition of the choreography: starting with something that’s recognizable as a codified language or form, and then all of a sudden diverting it into something that’s like a sort of breakdown of sense.’

He is unrepentant about the demands that LFE will make on its audience: ‘It should be challenging. But I think this disruption of what is known, whether it be of the body, of the scene or of reality, creates a harrowing kind of beauty.’