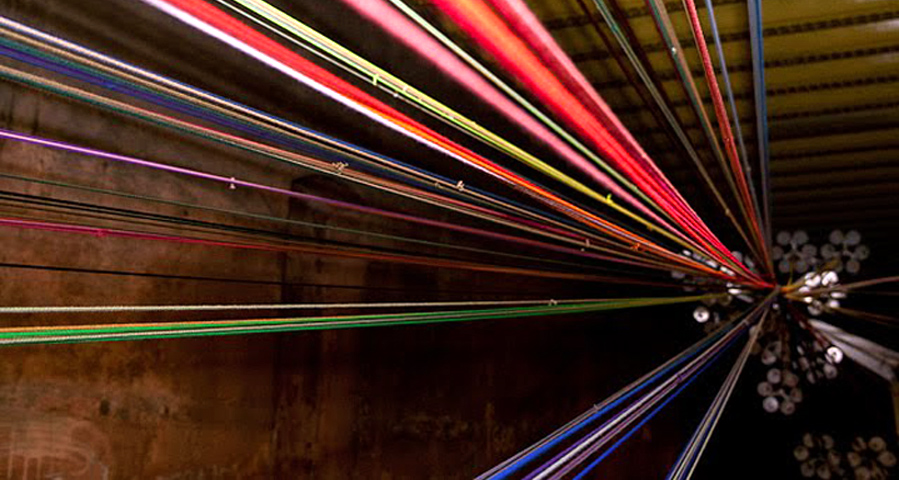 Crafts such as weaving and rope-making, with their repetitious nature, naturally echo the perception of time appropriate to their ancient origins: a cyclical, nonmetric time governed by man’s close cohabitation with nature, and which in turn inspires the mythic temporalities of recurrence and return. Within this same context, however, such practices also innocently mobilise mathematics and physics to extend and augment human work. Craft techniques, along with the counting, rhythms, songs and games that have always accompanied them, stand at the crossroads of the observation of domestic ritual and the unveiling of universal structure. They inhabit singular locales where the round of daily life, and our endeavours to improve it, intersect in a distinct and explicit way with important mathematical structures, allowing them to be isolated and physically manifested. If we understand mathematics as a generalized ‘science of structures’, we must admit that only very few of the latter are instantiated in material reality. Nevertheless, since modern mathematics owes many insights to weaving, knitting, knots, etc., we might conceive of craft as a portal through which the necessities of human life abut onto this vast field of potential knowledge.

Of course, the craftsperson’s heuristic investigation of qualitative properties and gradual refinement of processes prepares for the uniform quantitative regulation of these properties and processes in industrial production (selection and preparation of fibre, combing out, spinning, twisting and laying). Here, they will be diagrammed, mathematical models and physical constraints made progressively more explicit and codified, and subtracted from their craft origins. Nevertheless – as is evident from the consistency of ropemaking technique over thousands of years and many generations of technology – however rationalised production becomes, it continues to honour the tactile percepts that attended its historical birth. Before humans mastered structure, they were already industriously implicated within it.

This observation might suggest a reconciliation of the cyclical conception of time, founded on a perception of qualitative resemblances without necessitating their equalization and measure, and a linear time, founded upon a quantitative ordering of equal units. These two canonical forms relate respectively to two kinds of repetition, that of the observation of nature and that of the obedience to law (or: tradition and standardization, ritual and rationality). It is often held that the linear model consists in a sort of calcification, a subordination of repetition to conceptualized sameness, with time being inflexibly assimilated to isomorphic space.

Against this dualism, the helical form of the rope perfectly reflects the mutual coexistence of rationally-governed linear-industrial repetition (identical, juxtaposed metric units) and the periodic qualitative differentiations of ecological time (smoothly differentiated repeating cycles). Each infinitesimally thin slice of rope might be thought of as revealing a momentary constellation of strands, frozen at a point in their winding dance, with similar configurations recurring at regular intervals. But at the same time, the continuous form expresses the proclivities of the human frame and the capabilities of the early-technological mind. The problematic nature of human time persists, without resolution, at the heart of the ropemaking machine.

But what kind of machine is it? Halfway between craft and industry, we come across a human form tethered to a wheel and pacing backward blindly. This is the rope walk, where the spinner, tied by the waist to the spinning wheel, walks miles each day, drawing out the cord produced by the machine. According to a contemporary account, ‘the whole effect of the spinner moving slowly backwards in the dim light of the rope walk is that of a spider weaving a web in its lair’.1

Perhaps this worker is a close relative of the arachnoid philosopher who, in Nietzsche’s metaphor, casts the world in his own image, and then proceeds to ‘feed off his own substance, which he then unspools in concepts like the spider making its web’.2 Observing modern rationality creeping across Europe, Nietzsche sees its intellectual apotheosis in a blind devotion to science and conceptual thought, which the philosopher wrongly believes will transport him beyond the earthly into the realm of Platonic Ideality. On the contrary, for Nietzsche the concept is the secondary product of a life betrayed by anthropomorphism, a life whose proud self-regard only further degrades it. Finally, what does Enlightenment Man spin out (Nietzsche, punning on Spinne [Spider] and Spinoza, mocks the geometrical systematization of philosophy) but the ultimate yarns, God and Reason, with which he re-binds himself?

In our all-too-human will to turn away from the earthly, transfixed by the artefacts of our intellect, we turn our back on life. So that Nietzsche accuses modern man of choosing his own longevity over the fatal becoming that is the essence of life. He spins his days out in a protracted anaemia, which Nietzsche refuses with the words: ‘Verily, I do not want to be like the rope-makers: they spin out their yarn, and as a result continually go backwards themselves.’3

But this metaphor undoes the too-strict vitalist alternative between an immediate earthly experience and an over-rational idealism whose manufactured transcendence betrays it. In considering the ropemaker’s work, and the trans-historical thread of living, making, working and thinking to which it draws our attention, such a dichotomy unravels. It is precisely here that Conrad Shawcross’s practice intervenes, with a re-articulation of the Ideal and the tactile that bears gently but insistently upon the strident denunciations of Nietzsche and many who have followed him.

Far from exhibiting a laborious conceptual aridity, these machines—defiantly physical, pointedly non-instrumental—assert that we penetrate something of the darkness that lies outside our immediate (natural and cultural) milieu only through a lengthy and non-negligible passage through it. Their uncanny movements may speak of the disturbing autonomy of modern technology; but their open, diagrammatic character and their contextualization as singular art objects gives them not to production but to contemplation. If their meticulous construction invokes the abstract Idealities that fascinate us all, their materiality speaks to the enigma of how and where human consciousness ever encountered these gleaming jewels of thought. All technology and artistry, even in its most sophisticated and abstract guises, continues to draw out the consequences and the circumstances of that encounter.

This subtle contemplation of this diagram of the encounter between manufacture and Ideality may help save us from being caught in our own technological web: The ropemakers move backward into a void, but in observing the strands they lay before them, a collective history comes to light.