By the North Sea

In the week immediately following the death of Mark Fisher in 2017, I returned to the archives of a project that Mark and I had embarked upon to make a film about Dunwich, the East Anglian town that disappeared into the sea. In 2001 we took one trip to Dunwich during which we filmed and conducted interviews, but it went no further. We periodically talked about reviving the project but it never happened.

The Dunwich Project became a focus for asking questions about finality, about things that could now never happen, about the possibility of continuing, and about a distant friendship marked by depressive absences and constantly deferred promises to spend time together.

I soon realised that I was returning to what had already been an attempt at the repetition or recovery of an intensity of engagement and creativity that had met with an abrupt end, and which we must both have felt the loss of.

In this ‘definitively unfinished’ audio version, our actual trip to Dunwich becomes just one timeline in a convergent wave of intensity. Across a series of embedded hyperstitional narrative shells, what emerges is a common task pursued by Stillwell (1949), by Templeton (1968), by the two of us (2001), and then by myself in the wake of Mark’s death (2017). A search for a mode of time where nothing passes definitively but can, with the correct procedures, be accessed, resynthesised, recast, producing something new and unprecedented. 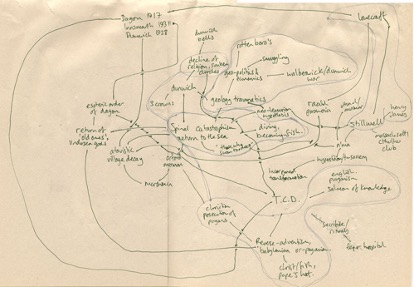 The project was finally premiered in an online livestream in association with For K-Punk, 2030 on 28 January, 2022.

This was followed by a performance at Miguel Abreu Gallery in New York, 4 March 2022.

The piece was included in ‘A Garden of Forking Paths’, in the MaerzMusik programme, as part of the Berliner Festspiele, 27 March 2022.

Performance and discussion as part of Mattin’s residency at Cafe Oto, 17 May 2022.

My thanks to Phyllida Nash, Peter Marinker, Suzy Wootton, Angus Carlyle, and Lisa Blanning for their voices. Thanks to Penny at Goldsmiths Music Studio, and to Amy Ireland who acted as script consultant throughout.