Synthetic photo-essay on the city and its fictions 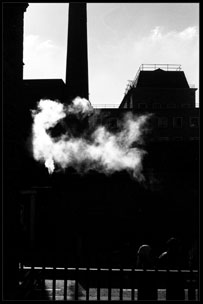 Wattle one century, timber the next, then brick, then stone, then brick again, then concrete. Building new foundations on old ruins. And sprawling out across the fields when there haven’t been enough ruins to go around.
In the result it’s been growing up as well as growing, and it must be about mature by now. Even a bit past its prime, perhaps. Beginning to go back on itself, as it were, may be.1

If there be ‘true’ londoners, they are to be pitied
Born into its cradle, the city a true home,
a negligible backdrop, a place of comfort;
Those who feel equal to its sophistication.

Only those from outside discover the real London
(‘Real’ not ‘true’—a distinction that must be upheld:
A never-complete becoming, irrational number
As opposed to a supposedly-known entity).

We do not presume to say those who are born and bred
cannot attain this state; only that they also
must cultivate alienation, throw aside
the blanket of homeliness they cast over the city.
Must accept they too share the utter dislocation
Of which London is the perpetual cinema.

Equally, the outsider, drawn ineluctably
into the phantom web of workaday normality
must free himself, by gargantuan efforts of will;
Wrest himself loose, flee back into vagabondage

Only the immigrant is wide-eyed and anxious
enough to imbibe this raw chaos a little.
Like the smog that catches in his throat, first of all
an assault, then a queasy symbiosis in which
he begins to exude London and then London
begins to penetrate into his darkest dreams 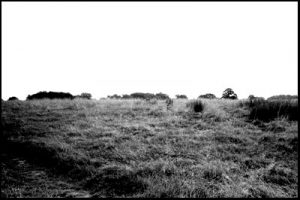 Black and white: Bill Brandt’s study in monochrome.
Francis Bacon under the gaslamp, Hampstead Heath.
The heath jumpcuts abruptly to african scrub
and blurred animal forms heaving in the heat.

Burrowing below-ground where light makes shadows flesh,
staggering out of the Colony Room smog,
veering like a breached longship. Vagabond navigation,
reading the signals through vapour of dipso nights. 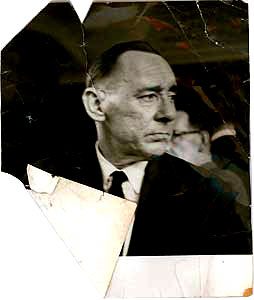 A world through the champagne glass, through the lugubrious
camera lens of Deakin AKA Conlin, the
notorious dwarflike lowlife photographer2

He gropes, one-eyed, semi-conscious behind the lens
toward the heart of this infernal machine.
The stranger’s first glimpse of london is most likely
to appal 3

And Thomas de Quincey, Mancunian exile
—all of Wales could not contain his wandering—
walked, a solitary and contemplative man through
London: Oxford Street, stony-hearted stepmother!
Thou that listenest to the sighs of orphans and drinkest
the tears of children.4

—He paced the terraces,
scouring the valleys north to Marylebone.

Its greatest luminaries are those who came from without;
Its proper essence fiction, miscegenation.
The reality of the fictional London
overflows the truth on every side.

When the Elephant Man appeared as if from nowhere
in a shop premises in the Whitechapel Road
towards the end of November 1884,
he was in his early days as a professional freak.5

David Lynch’s movie The Elephant Man draws
on an already-potent fictional tradition:
I understood a certain English thing, you know, but
for the film I got inspiration or ideas
more from books of London than from London itself…6

And an inheritance: Brit Celluloid BC
(Before Colour: before its mendacious promise
of a kaleidoscopic future beyond the
seedy decline of british society).

Ealing noir, day-for-night east-end police chases
issuing in endgames played out across the steam-shrouded
tracks of railway sidings. Oppressive and gloomy.
And David Lean’s Dickens flicks: These were no ‘adaptations’:

The marshes were just a long black horizontal
line then; as I stopped to look after him; and the
river was just another horizontal line;
and the sky was just a row of long angry red lines….7

Dickens in monochrome; writing like a camera
(Eisenstein discovered a ‘lap dissolve’ in the text).
Blood and Soot for Magwitch, gibbets under red clouds;
Ash and lace, Miss Havisham: White veil…dress…shoes…hair of white…8

The essential is that London is black and white:
an energy-processing monster that incites
its elements to extreme lambency and then
discards them as light-absorbent, burnt-out crusts.

I was walking around a derelict hospital
and suddenly a little wind-like thing came and
entered me, and I was in that time – not only
in that time in the room – but I knew that time.
I knew what it was like then, and it came out of that hospital.
Architecture is a recording instrument.
I’m sure that’s right. And that’s what happened. It was just
unraveling and I was picking it up.9 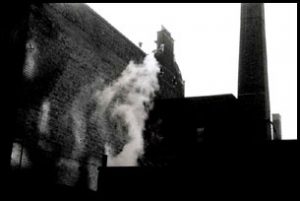 Synonymy of human body and industry….Darkness.
Boiled and bleached bones. White clouds rising from below.
Steam and Scalpel.

The hospital museum houses a replica
of Merrick’s sackcloth hood. The stitches bring to mind
that slow, deliberate zoom into the single square eyehole,
into the nightmares of the Elephant Man:
Filled with puffing steam-monsters, dark smoggy streets, and
the curse of monstrosity and the lash of cruelty. 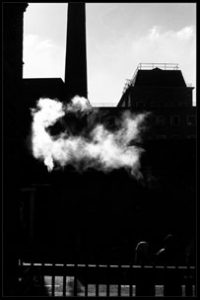 No more compelling exhibit than the building:
Merrick is only a monstrous sign, avatar
of a psychogeographical papilloma.
This perplexing structure, haphazardly extended
to house medical technologies that always
stayed one step ahead, new pathologies
of the industrial revolution.

Treves bowed over the prone figure of a man
on an operating table: we’re seeing more and more
of these machine accidents nowadays.10

Or you see pictures of explosions –
big explosions – they always reminded me of these
papillomatous growths on John Merrick’s body.
They were like slow explosions. And they started
erupting from the bone… what got me going was
the idea of these smokestacks and soot and industry
next to this flesh.11

Steam is the element of Merrick’s kindly soul:
his birth is announced with the slowmotion billow
of a puff of steam. Recaptured, abandoned,
his return journey is heralded by white clouds;
The train, the steamship, and then again the steam train,
ending at Liverpool Street. White ineffable clouds.

But in his dreams he wanders cities of blackness,
dirty streets populated by jeering children,
factories with rows of men chained to great machines
in which they are pistons. Despondent resonance
of Dickens’ Coketown, distilled essence of the industrial city,
where the piston of the steam-engine
worked monotonously up and down
like the head of an elephant
in a state of melancholy madness.12

With the opening shots, visual reconstruction
of the showman’s florid etiology of
Merrick’s condition, we already understand
a strange transmutation of image into flesh ;
knocked down in the street by elephants, the frightful
image of the creatures on the retina of
Merrick’s mother as she faints passes directly
into the womb, imposing its form upon the
budding embryo. 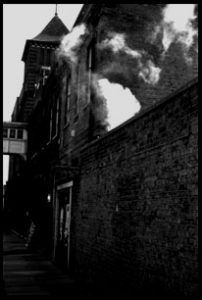 Everywhere, relics of paradigms overthrown.
Discarded piles of 50s minicomputer
tangled with pieces of iron bedstead.
The arteries of long-obsolesced fuel supplies,
studded with taps and switches and cast-metal outlets,
still cling to the walls like dead vines. In many places
they simply lock the ghosts in, doors never opened
again save by wrecking-ball. 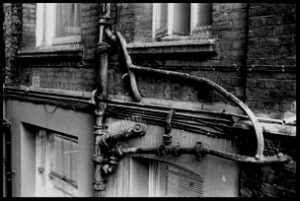 The saturation of history not yet wrung out
And each time the sensation passes through another
agent it thickens, and reaches consistency,
fiction and environment a sensory emulsion.

Perpendicular surfaces intercutting;
Every wall is an encrypted photogram.
This piece of celluloid adds yet another one.
A membrane inserted between place and consciousness. 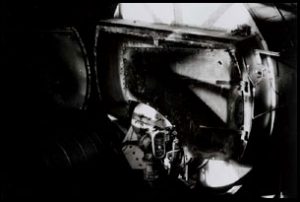 Photography is a mediumistic practice
not a self-expression, it dowses for sensations
in their raw state: neither fiction nor document.
The camera unearths sensory proclivities,
your own hidden, subterranean connections;
Continuity with this dense, indifferent,
impossible fabric. The city in reality
is a surface which is all exterior.

No dwelling within it, no breaking the surface
(so that photographs recollect more accurately
than memory itself): Thus there is no comfort
but this abrasive immanence upon which one
grazes and is grazed, injured, disclosed to oneself.

A thousand walks made alone in which I often thought my
pleasure in this ‘exterior’ could never mean anything
except how I was failing in certain ‘interiors.’13
But why berate the surface for its lack of depth,
when we could equally accuse our depths of lacking surface?14

Being young, our souls lack the fibre of this dense
irrational number, which, though one cannot encompass
its impossible totality, cradles us:
no matter which figure we elect as focus
we feel its whole, incomprehensible extension. 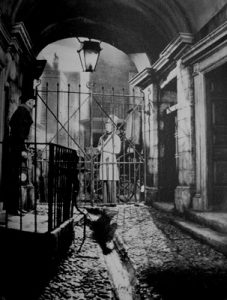 London is an atmosphere, a state of being.15
A participation in other people’s fictions.
A self-fulfilling prophecy its authors cannot halt.
Submission to the real; brute point of concentration

Until the journey outward, until we reach places
where one can no longer say the name ‘London’,
though its taste remains, bitter on the lips.
And the last tube station, the workers filing out;
their grey-eyed sagging march a salutary reminder.
Those for whom London is just an odious chore—
do they know it steals their energy to make dreams?

And then finally out. That tremendous relief.
Like a decompression. Life seems lighter. Greener.
You’re elsewhere now. Relaxed. Your thoughts turn to London.